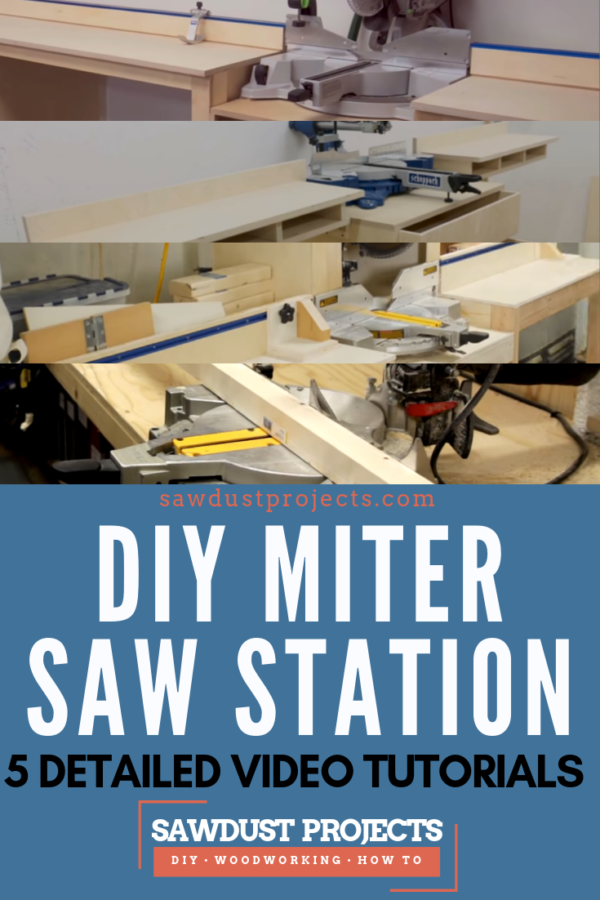 Miter Saw Station // Woodworking How To | I Like to Make Stuff

Bob does a great job describing his process and the tools he is using and not using.  For instance he mentions during assembly that you can use wood glue for this project but he decided not to incase he would like to take it apart in the future.  I also like the fact that he shows you ever step of the way and speeds up the footage. This makes the video much easier to view and doesn’t drag on like other nameless video’s that are out there.

(2:08) – Measurement and assembly of table height and orientation;

(8:27) – Explanation of final layout and decisions made.

(3:35) – I liked how he explained how he figured out the best places to install the dust collection ports and the showed the process for the two-inch margin to account for the underlying 2×4’s that he used to cut out the ports in the plywood.

(4:33) – Bob had a great explanation of the miter saw fence assembly and the important things to think about during assembly.

The miter saw video he did before was great and this follow up video makes tons of improvements.  There are so many details in this video that improve the overall experience, like the improved dust collection grates and the removable hood.  Bob makes a lot of great improvements to this project and explains the hows and whys extremely well in this miter saw station tutorial.

(1:00) – Changing the table and shroud to allow for compound miter saw cuts;

(4:39) – Addition of grates to the dust collection holes;

(5:36) – Addition of wood with angled chamfer to push dust into the collection ports;

(7:26) – Creation of storage shelves behind the miter saw fence;

(11:02) – Final explanation and discussion of changes made.

(2:55) – I liked how he used a cleat to hold the table in place during installation.

(5:36) – I liked that he added extra pieces in his miter saw box to push dust from the collectors into the ports.

(6:54) – I thought it was really smart of him to make the faceplate for the shroud detachable with magnets.

This is a mobile miter saw station made from plywood.  He uses dowels (1:00) to assemble the main box, and then attaches hinges for the fold-able tables and fences to fold down out of the way when not in use.  Overall, I thought it is a very simple, and easy design to layout and assemble. The only thing I would worry about is how stable the table would be if too much weight is added to the ends(7:11).

(6:38) – Wood u-plates for the wings to lock in under the foldable tables;

(6:20) – I liked how he installed an adjustable screw at the end of the wing support so that the height of the foldable table extensions could be adjusted up and down.

Tools Used In This Video:

Find the plans for this miter saw station here.

This is an interesting video, and I really like the aesthetics of the finished product.  I would have thought that he was going to go into more detail on how he figured out the height for the saw support section and the method he used to install and brace the fence.  Overall I liked how quickly the table came together and how easy he made the assembly.

(0:58) – Cutting, layout, pocket holes of legs and side pieces for the miter saw station;

(1:50) – Connecting rails and structural support of the miter saw table sides and legs;

(10:20) – Attaching the measuring tape to the miter saw station fence;

(11:28) – I really liked how he went over the cost and breakdown of the materials for the table, which not many other videos do.  It’s nice to have an idea of what a project will cost before you start it.

I thought that the only way to have a professional wood shop was to have a large miter saw station with long fences.  This video definitely puts that theory to rest. He goes over the problems with most big stations, and the solutions he has come up with to make his work station really versatile.

(3:20) – He explains the problem when you try to cut a board that isn’t perfectly straight;

(4:23) – Shows the spacing problem with the wood when its not flush with the fence due to the bow in the board;

(6:55) – He removes the simulated long miter saw station fence and shows the block he uses to support the wood he cuts;

(9:16) – Example of what he does when he wants to cut multiple small pieces with a stop block;

(10:00) – Notes how his miter saw is still versatile, but laments the lack of good dust collection.

About the Author: Logan Woodruff