Reciprocating saws, or what has come to be commonly known as sawzalls, have become a must-have tool in the modern woodworker’s and DIYer’s tool-belt. Not known as a fine crafting tool, the reciprocating saw is often used for demolition purposes, and will cut through wood, nails, rebar, and metal pipe quicker than most other tools out there. 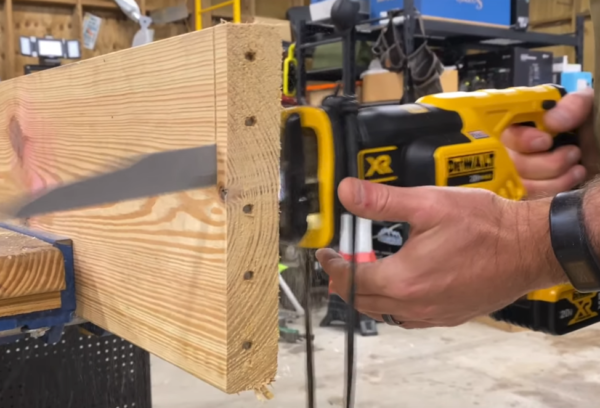 Two-handed designs commonly angle the secondary handle down in order to shorten the tool and allow for guidance of the tool in tight spaces. One-handed models tend to angle the motor up, which shortens the length and keeps the overall height about the same.

One-handed models are customarily not used in professional woodworking applications, but for the average DIYer, the one-handed versions can accomplish most tasks, just not as easy as the two-handed variety.

The Makita XRJ07 18V brushless reciprocating saw is one of the top contenders in the field of reciprocating saws.  The Makita’s motor can produce 0-3,000 strokes per minute and is combined with a 13/16” stroke length that produces efficient and fast cutting capabilities.

The Dewalt 20V Max XR brushless reciprocating saw is a great option for a two-handed saw that will make demolition in tight spaces doable. With a variable speed trigger and a motor that produces 0-2,900 strokes per minute, it has the capacity to accomplish the hard tasks.

The Skil 20V Compact two-handed reciprocating saw comes in with the best value compared with the other two-handed competitors, as you get a 2.0 AH battery and charger with the purchase. With a 1” stroke length and up to 3,000 strokes per minute, it cuts stuff…fast.

Milwaukee’s M18 Fuel Hackzall is a great piece of engineering coming in at 4.55 pounds and 14.8 inches long. In an independent test against other-one handed reciprocating saw options, it was rated as best in its class and as having the best vibration control overall.

Kobalt’s 24 Volt Max brushless reciprocating saw weighs in at 3.7 pounds and 13.58 inches long, with a 1-inch stroke length. At 24 volts it has the most voltage in its class and accomplished the quickest EMT cut in an independent test.

Ridgid’s 18 Volt Octane reciprocating saw, comes to the table with the best warranty in class: a lifetime warranty, which is probably why it also is the most expensive in its class at $147. While it is the longest and heaviest in its class, it makes up for it by cutting a 3” PVC the fastest and ¾” EMT the second-fastest.

Metabo’s 18-volt LTX compact reciprocating saw packs a punch in its small frame. It comes in as the shortest in length in its class and includes a 3-year limited warranty. It’s about average in the value category as well as in the weight category at 3.7 pounds.

Makita’s 18 Volt LXT reciprocating saw has a lot of great features. This is a very budget-friendly option, it’s the lightest in its class and includes many features, such as tool-less blade change and a spring blade ejection to make using this tool a breeze.

Be sure to know the features matter most to you before buying your next reciprocating saw. For the average user, some of the more important features might be vibration dampening, a pivoting shoe, and the overall weight of the tool. These features when combined together have a great deal of impact on the overall tool experience.

For the working professional, the size of the reciprocating saw, its weight, and the speed at which it cuts might be more important in order to timely complete your job. Each of the many different options plays a role, but it also might come down to which brand you have bought in the past and if you have to buy extra batteries and charging units or not.

Save It For Later 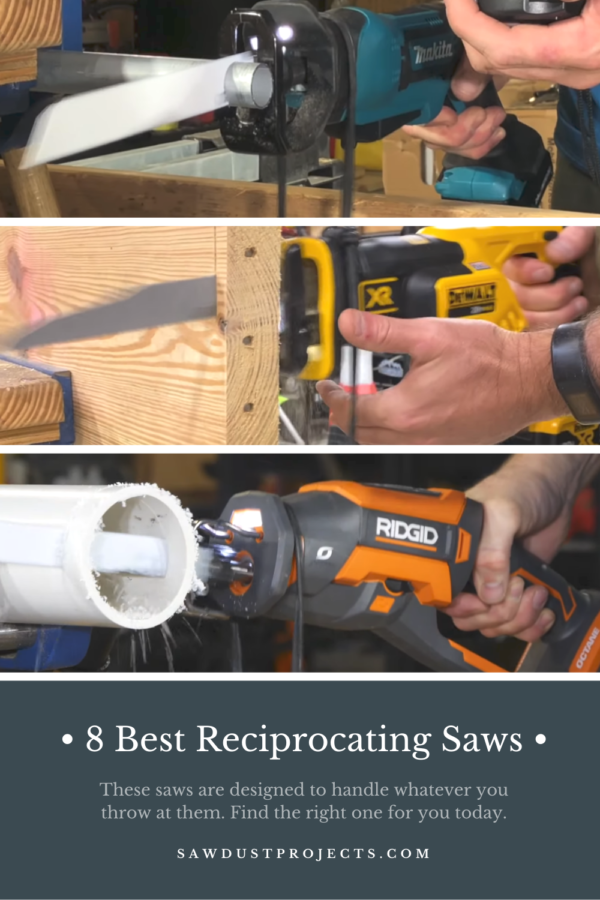 About the Author: Scott

Scott is a hobby woodworker who enjoys building and working on projects for the home. He has been dabbling in woodworking for the last 10 years and is always looking for new techniques and way to improve his skills.